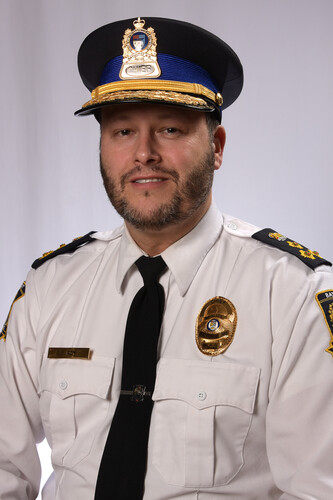 The City of Bathurst announces that Stéphane Roy will be leaving his position as Chief of Police of the Bathurst Police Force. Roy will continue his policing career as an Inspector with the RCMP’s Northeast District.

“This was not an easy decision to make. I take extreme pride in the 18 years that I have passed with the Bathurst Police Force. That said, after serious consideration, the opportunity that was presented to me was one I could not ignore. I am just grateful I had the privilege to be part of the Bathurst Police and will carry that honor forward in my new role”, said Roy.

“I am extremely pleased to join the Bathurst Police Force and thankful for the opportunity. Over the years, I have had the pleasure of working with several members of the city’s Force and was always impressed of their dedication and professionalism. My objective is to continue the efforts of making Bathurst one of the safest cities in our Province by working together with all stakeholders in the community”, Maillet stated.

“We are definitely sad to have Chief Roy leaving our Police Force. He was devoted to his members and our citizens, and his stewardship of the Force was exemplary. We offer our heartfelt thanks for his service and wish him well in his new opportunity. We also welcome Chief Maillet to the fold. He brings a wealth of operational and administrative experience to the Bathurst Police Force. We thank him for his commitment to us while we begin the search for a permanent Police Chief”, said Mayor Kim Chamberlain.