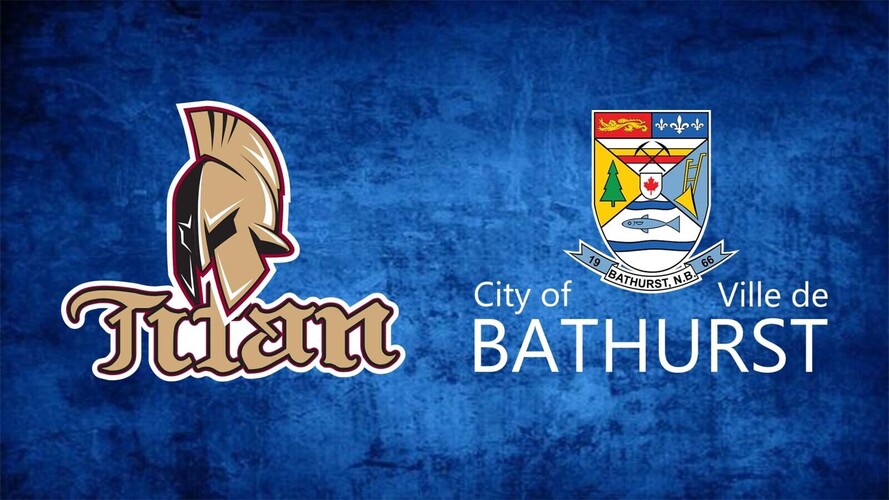 The City of Bathurst and the Acadie-Bathurst Titan have signed an agreement to keep the team well in place in the Chaleur. The announcement was made during a press conference held at the K.C. Irving Regional Centre.

“The City of Bathurst has been a proud partner of the Acadie-Bathurst Titan since 1998. It is a unique privilege to have our community and region identified as a Canadian Hockey League franchise location, this among 52 Canadian cities and 8 American cities. Thanks to the Titan, Bathurst and the Chaleur region are well represented on the national and international scale. And, with the positive economic and tourism spinoffs, it is important for the team to stay right here,” said Mayor Kim Chamberlain.

The initial one-year agreement will have the City offer a two-part financial grant to the Titan, including an amount of $75 000 grant, from monies raised through the City’s Accommodation Levy. This grant would also be included in the ensuing five-year agreement. A $100,000 grant from the City’s General Operating Fund will also be offered, $50,000 from the 2021 budget and $50,000 from the 2022 budget. The City will also purchase a Corporate Box that will be used for tourism promotional activities.

“Due to the urgency of the matter, we worked intensely to secure the initial agreement. With that said, we will now initiate discussions with the Team and our municipal partners to secure a long-term agreement. It is important to note the positive economic impacts of the Titan’s presence is not just felt here in Bathurst, but throughout the region. Therefore, the dialogue with our municipal partners is also important,” said Chamberlain

“The Acadie-Bathurst Titan are extremely proud and thankful of this new venture with the City of Bathurst and the positive impact it will continue to have for our economy and the community. We applaud the city for recognizing the Titan are more than a hockey team. Our players are role models for youth in our communities and their talent on the ice provides a platform for friends and families to gather and celebrate together. We’re proud of the city’s commitment to a promising future for our regional team,” said Serge Thériault, Board Chair for the Acadie-Bathurst Titan.

« We are very enthusiastic at the news of the agreement signing between the City of Bathurst and the Acadie-Bathurst Titan, allowing the franchise to remain in the Chaleur Region,” Said QMJHL Commissioner Gilles Courteau. “One of the objectives of the QMJHL is to be an economic and social engine for entrepreneurs and citizens in cities where our franchises are established. The arrival of the Titan in 1998 was definitely a positive factor for the City of Bathurst and surrounding communities, and we are happy to see that continue. It is also a testament of success when a team that is situated in a municipality of less than 15 000 residents is able to go head-on with the other 59 teams in the Canadian Hockey League to win the cherished Memorial Cup, making the City of Bathurst shine from coast to coast”, concluded Commissioner Courteau.